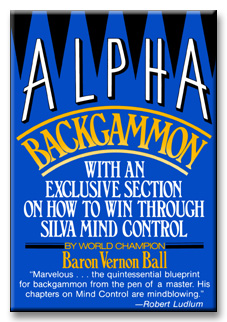 Alpha Backgammon is, without a doubt, the most unusual book on the game ever written. Only the first 154 pages deal with backgammon instruction; pages 155 to 209 deal with mind control, ESP, psychokinesis, meditation, self-programming, drugs, etc. Is this work the mutterings of a crackpot? Not at all. Author Baron Vernon Ball is a sound and successful person, and his provocative ideas deserve serious examination.

The technical aspect (pages 1–154) is designed for players ranging from the beginner to the strong intermediate. Diagrams are plentiful (two to a page), and the accompanying explanations are straightforward. Only black and gray print is used, which detracts from the appeal of the book but keeps the price reasonable (the paperback copy is $5.95). Some of the examples in the chapter on slotting were not too carefully thought out, but in general the technical quality of the backgammon advice is of a high order. (Naturally, one expects this from an author who, according to the Backgammon Magazine's poll, is ranked as one of the top thirty-two players in the country). Rather than recommending a style of play that leaves blots around the board, Mr. Ball gives several examples in each situation as to when to play conservatively and when to take risks.

Author Baron Vernon Ball The book title, Alpha Backgammon, is based upon terminology of a course on mind control which Mr. Ball took from Jose Silva at the Institute of Psychoorientology, Laredo, Texas, According to Mr. Silva, persons can have their brain waves measured on an electronencephalograph to see by the cycles-per-second output whether they are functioning on "Alpha" (subconcious mind) or "Beta" (concious mind). When they are functioning on "Alpha" they may put their psychokinetic ability to work manipulating the dice. There are many experiments in the field of psychokinesis ("mind over matter"), and they all seem to show that many people are able to produce results with an unbelievably high success ratio. Mr. Ball's technique for using Alpha ability to roll good numbers begins with a self-hypnotic form of relaxation that is proven and successful. He then explains how to concentrate on the desired result in a manner to unharness your ESP ability.

Skeptical? Nonbelievers do not have any unusual psychic abilities, according to the experiments of the famous J.B. Rhine at Duke University. The effect of various mind distorting drugs on PSI ability is discussed. (Conclusion: a couple of cups of coffee is helpful, but pot, cocaine, mescaline, etc. are all very harmful.) All things considered, I believe you will find some of the Baron's techniques very beneficial in overcoming the stress of competition. As to whether they can be used to roll numbers more successfully, that is up to you to find out. A word of warning, though; don't be overly confident in directing your psychokinetic techniques toward beating the crap table; people with lots of money who think they have special psychic powers over dice are warmly welcomed in the casinos of Las Vegas!