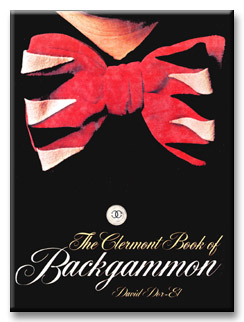 Most beginners leafing through the first chapter, titled "Mathematical Information," will immediately seek a simpler game.

Tables, charts, and numbers abound. Magriel would have whimpered and taken up knitting instead of backgammon. Cooke would never have left Yankee Stadium. This chapter would scare the socks off a physicist.

The problem is overkill in presentation. Generally, the book is solid and basic; the information that the beginner needs to start playing a reasonable game is here. Unfortunately, Dor-El complicates it.

For example, to figure entry odds for one man, he gives an algebraic formula. He does not stress the numbers 11, 20, 27, 32, and 35, and relate them to the rest of the game. Those are important; the formula merely distracts. The old forest for the trees trick.

Later, in the chapter on doubling, Dor-El creates a full page flow chart for seven point matches. The head swims, the eyes cross. Cooke gave the same information in a couple of clear sentences, to wit, you don't lose much letting your opponent go from odd to even if you drop a double. (With attendant qualification, of course.)

The chapter on doubling is worth the bread for the new comer. Dor-El gives many positions, with good explanations. He clearly differentiates tournament tactics form money tactics. Many authors are muddy here, to the beginner's confusion.

Dor-El's language plods a tad. Not a major fault. Sentences do not sparkle and that stems from his desire to be thorough and clear. Now and then he seems on the verge of defeating himself.

On the whole, The Clermont Book of Backgammon is thorough and basic. It is worth adding to a beginner's library, but as a first book it will intimidate most beginners. Also underlying theory tends to get lost in the welter of specifics, and that is a loss for a beginner. Cooke or Magriel would be nice complements to Dor-El.

One final word on all the tables and charts in the first chapter. The chapter is handy and useful for two reasons. First, all the numbers are in one place for reference. Second, basic as the numbers are, Dor-El elaborates the living hell out of them. A little world almanac of backgammon's basic goodies.