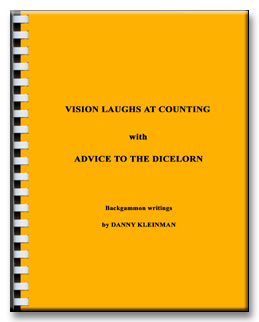 Danny Kleinman, a Los Angeles computer whiz and backgammon analyst, has put together two excellent collections of writings for serious backgammon players. The first is called Vision Laughs at Counting, and the second I will refer to as Sequel, as it is a supplement to the first.

Both books are collections of short articles on various backgammon topics. The articles vary widely in both subject matter and value. The subjects covered range from fine points of technique, doubling strategy, money management, and psychology to the wiles of backgammon hustlers and cheats. The articles' values range from indispensable (bear-ins and bear-offs, tournament situations, the ace-point game) to totally esoteric (hyperpips, the "shade-and-shadow" discussion).

Kleinman's chapter on the cube in Vision and his easy-to-remember "Simplified Doubling Guidelines" in Sequel are probably the best material available on the cube. However, the articles that make the books unique are those that cover the technical detail often hinted at, but never fully disclosed, by other authors.

Mary Hickey For example, Magriel tells you that if you want to hit a lone man who is trying to escape with a lone man of your own, the right distance to be is eleven to fifteen pips away — but which of these distances is really the optimum? Magriel doesn't tell you, but Kleinman tells you that and more in his article on "Creeping" (p. 67 in Vision).

Another example involves the treatment of last-roll situations. Many authors give sets of rules or general principles to tell you how to place your last two men prior to the last roll in a bear-off. Kleinman has done them all one better — he has, with the aid of a computer, developed one single rule that obviates the need for the others.

This sort of crisp precision is typical of Kleinman's technical writings. There are not vague generalities or half-answered questions to keep you wondering. Even the reader who finds the mathematics too complex can still benefit from the conclusions reached.

There is a selection of quizzes at the end of both books. Each quiz is named for a particular player at the author's club, and the questions cover such important subjects as dice changes and meaningful kibitzing; however, these "quizzes" should not be taken as mere jokes. You may have never actually met Hersch Malamud or Alan Martin, but I'm sure you'll recognize them just the same in the quizzes named for them, and perhaps get to know them a little better.

My only complaint about the books is the quality of the printing, and in particular, of the diagrams. Surely the creator of the backgammon-playing computer Jack Gammon could come up with a computerized text editor that would even up the margins, and maybe even invest in a rubber stamp for the diagrams.

These books are not for everyone. They are graduate level material, and contain little that will be of any benefit to the beginner or casual player. This is stuff for the serious player, preferably one with a strong mathematical bent. However, I strongly recommend both books to any player with an analytical mind. In these books you will find the answers to many puzzling problems.

Both books are available directly from Danny Kleinman. For more information, write to him at:

The last price quoted was twelve dollars for either book.