The Finesse of a Master
Gaby Horowitz and Dr. Bruce Roman, 1980
Las Vegas Backgammon Magazine, December 1980
The Finals of the 1980 Eldorado Classic in Reno, Nevada brought two of the best face-to-face in an exciting confrontation.

It was the best two-out-of-three nine-point matches with the first match going to Paul Magriel and the second to Chuck Papazian. Slugging it out point by point, Chuck was leading 6–5 in the final match when he doubled in the following position.

Is a four pip lead in the race and one additional man off a sufficient technical advantage to warrant a double? Of course not.

In a tournament the most important variable to evaluate is the score. Leading 6–5 in a match to 9, Chuck wisely chose to double Paul into a take. If he is successful he will have reached the Crawford game with the score 8–5. Should he lose the score would be 6–7 and he would still be in the match.

With approximately twenty-five per cent of the numbers on his next roll (3-3, 4-4, 5-5, 6-6, 6-5, 6-4, 5-4?) making his position too formidable, he had arrived at the point of ultimate take.* When you are two points away from the match with an even score, you should double your opponent for the match at the slightest advantage. Considering the skill level of both finalists, doubling Magriel to the Crawford game is very close to doubling for the match. 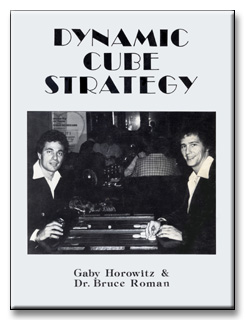 This article is excerpted from
Dynamic Cube Strategy The double by Papazian shows respect for Paul's game because we doubt that he would have doubled an inferior opponent in this position. This is an excellent example of the way in which the cube should move between equally skilled opponents.

The potential gain of leading 8–5 versus the potential loss of trailing 6–7 clearly indicates a double in this position.

This superb finesse was met with howls of disbelief by various "experts" kibitzing the match. Magriel, of course, accepted the double (after the match he admitted that he did not enjoy taking it) and proceeded to roll a double and several large numbers while Chuck responded with several misses. He was unable to accept the redouble and Paul continued on to win the match.

While menials from the "School of Judging Results" chorused their disapproval of the double, Gaby proclaimed, "I find the double superb!" This elicited an uproar of disagreement from a group of San Francisco players. Rather than attempt enlightenment at the end of a long three-day tournament, it was decided that fine food and wine were of a more immediate importance.

This incident should serve as a forewarning that you will not always be heartily congratulated for applying advanced principles. Do not seek agreement from the rabble, for it is not superior skill or awareness that earns them their title. If Papazian were to be confronted with the same decision under identical circumstances, he would unerringly offer the cube again. We suggest you employ a similar philosophy.

* Point of ultimate take:  The point at which, having obtained a sufficient positional advantage, the player must offer the cube or risk "losing his market" for a take. Many times this point is reached immediately preceding a roll that could cause marked change in advantage. When doubled at this point it creates a true dilemma for the player because his desire to accept the cube is directly opposed by a desire of equal magnitude to decline the cube. Regardless of his decision, he is unhappy with having to have to make a choice at that particular point in the game.
© 1980 Gaby Horowitz and Bruce Roman