Help for the Hustler?
Danny Kleinman, 1982
Double Sixes from the Bar 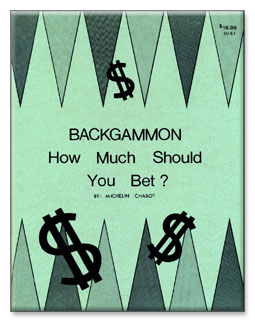 Backgammon:
How Much Should You Bet?
by Michelin Chabot Last year, says my economist friend Dr. Ludwig von Measles, was the worst year in history for backgammon hustlers. The recession cost many of their pigeons the salaries from which the hustlers had been supported, and as a result, a record number of hustlers went bankrupt.

To the rescue comes Michelin Chabot with his new book, Backgammon, How Much Should You Bet? He addresses two questions: the size of the stakes, and cube action. Citing (but not deriving) formulas from Richard Epstein’s The Theory of Gambling and Statistical Logic, he develops principles for choosing the stakes first. He labels some of his variables misleadingly. For example, his “single-trial probability of success” is (in effect) your winning chances adjusted to reflect different sizes of wins and losses (as from gammons, backgammons and additional cube turns).

Most harmfully, Chabot gives formulas for “Psuccess” taken from the mathematical theory of “gambler’s ruin.” This presupposes that you have a specific goal (e.g., winning $100) and a specific gambling capital you are willing to lose (e.g., $1,000). Between and beyond these two limits, money is meaningless. That is, it is deemed no better to win $200 than to win $100, and just as useless to win $90 as to lose $900 (except insofar as you can use the money you have left to continue playing until you either win your $100 or go broke trying). Clearly, there are very few real-life circumstances in which this is a rational set of values; and the regular playing of backgammon in the hopes of winning money is not one of them.

In two flowcharts, nearly the same, Chabot gives advice to the player who “wants to maximize his probability of success.” To the pigeon, he says: make the “maximum bet” (an amount calculated taking into account the size of the chouette and the number of games expected to be completed in the session, as well as the capital which the pigeon is willing to risk losing in the session).

What is the rational maximum stake for the hustler (or for any player who figures to be a winner)? I have my own concept, different from Chabot’s. I share with Chabot the notion that a hustler shouldn’t play for stakes so high that he risks not being able to collect his winnings from a loser in his game, as well as the rule of thumb to treat the stakes, in effect, as the nominal stake multiplied by the number of opponents you must face when you are in the Box. But my basic concept of your proper maximum stake is the largest at which each point on the score sheet is worth no more and no less than each other point. That is, winning a 16-game should be no more and no less desired by you whether you are already +60 or −60 on the score sheet for the session. At such a stake, you can allow your cube actions to be influenced only by the backgammon position and its arithmetic, and by the psychology of your opponents — not by such extraneous emotions as fear of relinquishing points won or greed to recover heavy losses.

In discussing cube actions, Chabot introduces two goals. One of these, maximizing “hourly expectation,” is reasonable. If you have a large positive equity in the next game, it is worth passing a marginally sound take in a game which could last a very long time (such as a back game which may continue for a long time after a late shot). But Chabot misapplies this concept. He shows a backgammon position where by doubling X expects to get a take from O and win an average of .9 units per game, but where by waiting in the hopes of doubling O out, X’s expectation is only .6 units per game.

Chabot’s second goal, maximizing “sessional expectation,” is utterly unreasonable. He described this goal “in other words” by supposing that “the player may have a positive score that satisfies him and he wants to play so as to be sure he’ll still have that positive score when the session ends.” Chabot overlooks the surest way to achieve this goal — by quitting the chouette with this positive score. Instead he recommends that “a player might choose not to offer cubes that he would normally give, and not to accept cubes that he would normally take.” By so behaving, however, a player surrenders equity — and may actually turn himself from a money favorite into an underdog in the game.

Backgammon, How Much Should You Bet? mentions only five actual backgammon positions. One of them occurs twice, the first time as Example 35. It is a race, except for insignificant contact on the mid points, with the player on shake having 100 pips to his opponent’s 114. Chabot’s cubeless “computer analysis” gives the roll an 80% chance of winning (my own estimate is 81%). Despite this, in Example 38 he tells the doubled player to pass (at the 2-level or 4-level if he’s maximizing his “hourly expectation,” the 8 level or 16 level if he’s maximizing his “sessional expectation”). I certainly don’t quarrel with this advice. But I find it inconsistent with his urging the roller not to redouble, at any level, whether maximizing “hourly” or “sessional” expectation. Chabot’s use of “hourly expectation” seems to require that you only turn the cube when you expect your opponent to pass quickly, unless you’re down to the last shake.

To “render the text more personal and lively” (as he says in his Foreword) Chabot presents his conclusions as the advice of “Peter Brown” (a strong backgammon player and mathematician) to “John Stone” (a strong but unmathematical backgammon player). Chabot never fleshes out his fictitious characters though. He succeeds only in cluttering his already inelegant writing with phrases like “Peter is of the opinion that” and “John points out to Peter that” every time he has something to say.

I believe that Michelin Chabot is sincerely trying to help backgammon hustlers. He reiterates my caveats about the importance of using precision dice and cups and the dangers of playing against deadbeats, cheats, and colluders.

My hustler friend Hersch Malamud has no sense of humor and takes a dim view of human intelligence. When I started to write backgammon satire, Hersch warned me of the danger every satirist faces — that some readers will mistake his irony for serious advocacy. I took Hersch’s warning too lightly. Apparently Michelin Chabot, who ready my Vision Laughs at Counting, failed to see my satiric “Gaby Horowitz Quiz” for what it was — a reductio ad absurdum of the very sort of theory of “money management” expounded with such technical detail in Backgammon, How Much Should You Bet?

To anybody unfortunate enough to have bought Chabot’s book, I apologize, for any encouragement I may have given unwittingly to the author.